What is a Hyperbaric Oxygen Therapy (HBOT) treatment?

During a hyperbaric oxygen treatment, the patient lies in a hyperbaric chamber for between 60-90 minutes, during which the atmospheric pressure is slowly increased. During the treatments, you breathe 100% pure oxygen. Under normal conditions, hemoglobin carries oxygen to all the body’s cells. Hyperbaric oxygen therapy saturates the serum in the blood vessels that carry hemoglobin, enabling them to deliver 10-15 times more oxygen. This saturates the body’s tissues – reversing hypoxia (low oxygen levels) – and creates cell healing.

Include comfortable mattresses, blankets, and pillows for your comfort during treatment

Allow you to watch TV or other entertainment during sessions 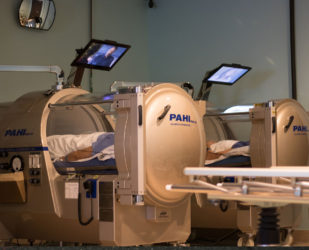 Hyperbaric medicine is the use of high concentrations of oxygen at pressures higher than atmospheric for the treatment and management of disease.  The first documented use of hyperbaric therapy occurred in 1662 when a British physician created an airtight chamber, called a ‘domicilium’, in which the atmosphere could be compressed and decompressed using oxygen bellows and valves.  Although it is unlikely that the physician’s patients benefited from time spent in the domicilium, his work is remarkable, particularly because it occurred before the discovery of oxygen.  In the 1800’s, hyperbaric chambers became popular throughout Europe.  The foundations of hyperbaric medicine were laid in 1872 by Paul Bert, a French engineer, physician and scientist, who wrote about the physiological effects of air under increased and decreased atmospheric pressures in La Pression Barometrique.